Your Partner In The World Of Global Markets Trading

By the beginning of the trading day of August 7, 2015 the technical picture in the FOREX market looked as follows:

according to the market participants’ power balance chart, at the moment the Forex Majors segment is dominated by neurtal-bearish sentiment. This can be seen from the general distribution of forces (the first column on the left): 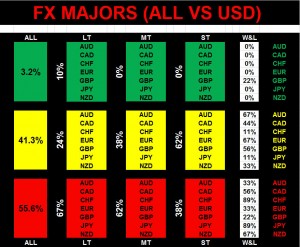 As for the long-term trends, the balance of power here indicates that the market is dominated by fairly strong bearish sentiment. At the moment, slightly more than two-thirds of market participants have joined the bears’ camp (about 67%), while 24% of players are in the category of observers, the positions of bulls are insignificant (about 10%).

In the medium term, the market demonstrates almost the same price dynamics as on the long time frames. Here, in complete absence of bulls, slightly less than two-thirds of market players have joined the bears’ camp (62%), the remaining share of the market belongs to neutral market participants (38%).

On the short time intervals the market is dominated by neutral sentiment. Currently, in complete absence of bulls, the majority of market players are in the category of observers (62%), while the remaining share of the market is under control of bears (38%).

From the technical point of view, the US dollar index continues to consolidate in a price range of 93.00 – 98.00, which was formed after a long-term uptrend. During yesterday’s trading the US dollar index demonstrated mixed price dynamics, which was accompanied by low level of volume. By the end of the day the US dollar index has barely changed. As a result, a second consecutive neutral candle with a small-sized body and short shadows has formed on a daily chart. Thus, by the end of the week the market came close to the key resistance level on the daily and weekly charts. During the two-day consolidation, a chart pattern – symmetrical triangle has been forming on smaller timeframes, as you know, it can be broken both up and down.This pattern may well be the last stop before further upside market movement into 100.75-101.50 area (2015 Highs). On the other hand, we do not exclude a reversal on the top of the market and the beginning of the downward movement.

Judging by the sum of signals of three trading strategies that we use, at the moment the share of bulls in the USD Index stands at 44%, the share of neutral market participants equals 56%, the share of bears is 0%. Today we expect a mixed price dynamics, but do not rule out the continuation of the upward movement in the USD index.

This Friday may be a very interesting day. Our scenario is as follows: if NFPR will be lower than expected, we expect a false upside breakout of the triangle and continuation of the downward movement in the next week. If NFPR come in line with expectations or better, we expect a false downside breakout and continuation of the upward movement in the next week. 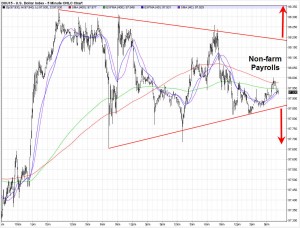 In our opinion, today it is better to refrain from active actions in buying or selling the USD against other major currencies.

Today the CHF, JPY and NZD seem to be the weakest currencies against the US dollar (first column on the right).

As for the cross rates, here we would like to draw your attention to the fact that today the CHF is quite weak against most major currencies. Judging by the sum of signals of three trading strategies that we use, at the moment the share of bears in the CHF has reached 61.9% level. In this regard, today, we recommend looking for opportunities to sell CHF against other major currencies with a good P/L ratio. Turning to the balance of power chart for CHF cross rates, we will see the following picture: 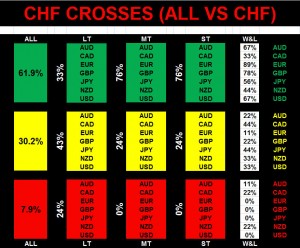 Among the most important events and economic reports published or scheduled for publication today first of all it is worth noting the recent publication of statements by the central banks of Australia and Japan. According to RBA, the jobless rate in Australia is set to remain little changed for the next 18 months, instead of drifting higher as earlier predicted. It also cut its forecasts for GDP growth in 2016. It now expects the economy to grow by 2.5% to 3.5%, compared with a May forecast of 2.75% to 3.25%.

As for BOJ, the central bank’s nine policy board members voted 8-1 to leave unchanged its main policy of buying assets at an annual pace of 80 trillion ($640 billion), as had been widely expected. The bank also reiterated in its policy statement that the Japanese economy continues to recover moderately. The bank also raised its views on housing investment.

The key event today is the long-awaited report on the state of the US labor market. In our opinion, this report may change many things: the future dynamics of the US dollar, the stock market and the commodities market sentiment. The NFPR and UR which will be released today may determine the date of rate hike in the United States.

A little earlier, during the European trading session, traders also should pay attention to reports on the trade balance in UK and the volume of gold and currency reserves of Switzerland. During the US trading session, along with the publication of important statistics related to labor market in US, a similar report is expected in Canada.

Among the most important events that occurred in the market yesterday, first of all it is worth noting the regular MPC meeting and the key interest rate decision by BOE. The 8-1 decision by the Monetary Policy Committee to keep the benchmark rate at a record-low 0.5 percent was unexpected, with most economists forecasting that at least two voting members would push for tightening.The BOE also released its quarterly Inflation Report, in which it said the near-term outlook for inflation is subdued and the recent decline in energy prices will bear down until at least the middle of 2016.

The Bank of England governour, Mark Carney sent an unexpectedly dovish message to financial markets yesterday as it said the falling oil price and the strength of the pound would keep inflation “muted” even as wages pick up and the economy continues to grow. 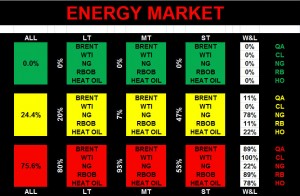