Your Partner In The World Of Global Markets Trading

By the beginning of the trading day of August 17, 2015 the technical picture in the FOREX market looked as follows:
according to the market participants’ power balance chart, at the moment the Forex Majors segment is dominated by neurtal sentiment. This can be seen from the general distribution of forces (the first column on the left): 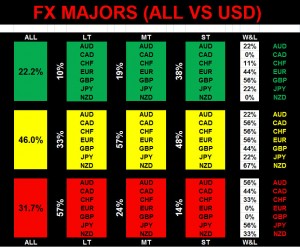 As for the long-term trends, the balance of power here indicates that the market is dominated by bearish sentiment. At the moment, slightly more than half of market participants have joined the bears’ camp (57%), one third of market players are in the category of observers (33%), the positions of bulls are insignificant (10%).

In the medium term, the market is dominated by neutral sentiment. Here, slightly less than half of market players are in the category of observers (57%), the market share of bears equals 24%, the positions of bulls stand at 19% level.

On the short time intervals the market is dominated by neutral sentiment as well. Currently, slightly less than half of market participants are in the category of observers (48%), the bulls control 38% share of the market, the positions of bears are insignificant (14%).

From the technical point of view, the US dollar index continues to consolidate in a price range of 93.00 – 98.00, which was formed after a long-term uptrend. Based on the analysis of candles on the weekly chart where a strong bearish candle was formed near the level of resistance (98.00), this week the market has a good chance to continue the downward movement within the range indicated above.

During Friday’s trading the US dollar index demonstrated mixed price dynamics, which was accompanied by low level of volume. By the end of the day the US dollar index rose by 0.07% to reach session high at 96.69 level. As a result, a neutral candle with a small-sized body and short shadows was formed on a daily chart.

Judging by the sum of signals of three trading strategies that we use, at the moment the share of bulls in the USD Index stands at 0%, the share of neutral market participants equals 78%, the share of bears is 22%. Today we expect a mixed price dynamics in the US dollar index, however we do not rule out the continuation of downward movement as well. In our opinion, today it is better to refrain from taking active steps in buying or selling the US dollar against other major currencies.

As for the cross rates, here we would like to draw your attention to the fact that today the EUR is quite strong against most major currencies. Judging by the sum of signals of three trading strategies that we use, at the moment the share of bulls in the EUR has reached 57.1% level. In this regard, today, we recommend looking for opportunities to buy the EUR against other major currencies with a good P/L ratio. Turning to the balance of power chart for EUR cross rates, we will see the following picture: 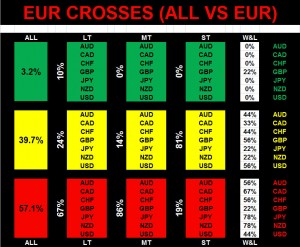 On the other hand, it should be noted that today the NZD looks quite weak against most other major currencies. Judging by the sum of signals of three trading strategies that we use, at the moment the share of bears in the NZD has reached 57.1% level. In this regard, today, we recommend looking for opportunities to sell NZD against other currencies with a good P/L ratio. Turning to the balance of power chart for NZD cross rates, we will see the following picture: 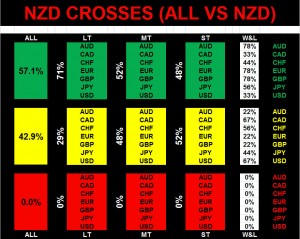 Among the most important events and economic reports published or scheduled for publication today, first of all it is worth noting the preliminary report on Japan GDP growth rate. According to the report released a few hours ago, the Japanese economy has slowed its growth in the second quarter of 2015, the actual value of growth (-0.4%) was slightly better than expected (-0.5%) and much worse than the last quarter’s (1%) values. Some analysts say the result may press the central bank to take action and boost quantitive easing as early as October. The main reasons for the GDP contraction were the decline in private consumption and the decline of exports to the US, Asia and Europe. It also should be noted that Japan’s exports fell by 4.4% compared to the previous quarter, it is the strongest decline since 2011.

Today, during the European trading session two reports on retail sales in Switzerland and trade balance in Eurozone are expected. Finally, during the US trading session it will be interesting to see the index of business activity in manufacturing sector in the state of New York, as well as the volume of purchases of long term US securities by foreign investors.

Among the most important events that occurred in the market on Friday, first of all it is worth noting the publication of the report, released by European Union statistical agency. It showed that the eurozone’s GDP growth slowed to 0.3% from 0.4% in the first quarter, missing economists’ forecasts of a 0.4% gain. The data also highlighted the big divergences within the 19 countries sharing the euro, which threaten the region’s prospects for a sustained recovery. Accelerating GDP growth in Germany was offset by weaker growth in Italy and the Netherlands, while the French economy stagnated.

Another report, released by BLS on Friday, showed that U.S. business prices rose for the third straight month in July, a sign inflation has stabilized following months of historically weak readings. The producer price index, which measures the prices companies receive for goods and services, rose a seasonally adjusted 0.2% in July after climbing 0.4% in June. Core prices, which strip out volatile energy and food components, were up 0.3% in July.

Also on Friday, the latest numbers from FED showed 0.8% increase in industrial production. It was the biggest rise since November and followed a revised 0.3% decline in the prior month. Total industrial output, which includes mines and utilities, climbed 0.6 % as oil drilling rose for the first time since September. 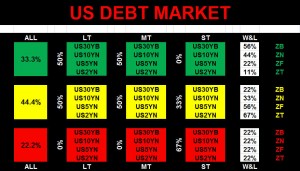